On June 16th, FERC announced that the first two Order No. 2222 compliance filings, NYISO and CAISO, had been accepted pending further compliance detailed in new orders. Each of these orders is more than 100 pages, with the NYISO order coming in about 50 pages heftier than its California counterpart. Armed with weekend reading materials, we began cataloging the ups and downs, surprises and confirmations.

I’m here with a two-part blog series to break down the score and implementations for the New York side of things. How do aggregators fare in the (mostly) final set of requirements? Were the industry’s requests of FERC generally successful? How did the NYISO or other groups not aligned with DER aggregators fare? All that and more is just a scroll away.

Assessing the Impact to Aggregators

The topline news is that the concerns of Aggregators were generally considered to be relevant by FERC, resulting in a conditional acceptance of the NYISO’s filing. FERC is requiring NYISO to implement changes to comply with (nearly all of) 2222 in Q4 of 2022. Conditional, as the NYISO has 60 days (from 6/17) to file in response to more than twenty directions from FERC.

Within the order I identified 50 items of note - this includes cases where FERC declined to ask the NYISO for anything or denied a protest from industry groups, as well as items which have to be addressed in the NYISO’s forthcoming compliance filing. There are two high-level spectrums to view these items on:

Using two axes, I defined a quadrant chart to help understand where these items fall. I classified the 50 items as 14 losses, 18 neutral, and 18 wins with respect to aggregators of DERs. Below is the Leap perspective on a subset of these items, classified by color into the topical areas of the filing. Items to the right of the y-axis are neutral-to-positive wins, while items to the left are neutral-to-negative losses for Aggregators. 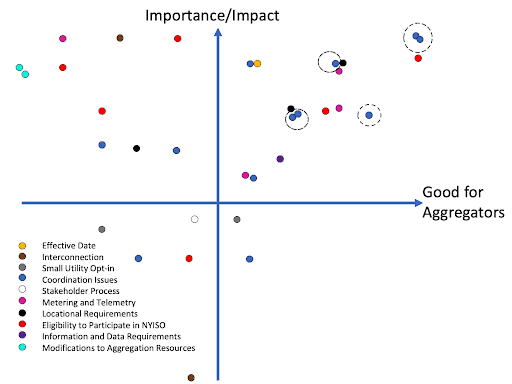 For this series, I’m going to break down three of the most important item groupings on the graph above, starting with the teal items furthest to the left on the chart.

These dots encompass several items related to Aggregator reporting of modifications to an existing aggregation. The NYISO’s original filing stated that “incremental” changes to an aggregation must be reviewed. This triggers a 60 day review period in which the Distribution Utility (DU) may raise issues with the aggregation’s participation in the NYISO markets. FERC agreed with a filing from the NYTO (New York Transmission Owners) that the language should require review upon any change to an Aggregation. This update means that any change can cause a review to be triggered, re-entering the two month waiting period for an entire aggregation.

Simultaneous with the NYTO’s filing, AEMA (Advanced Energy Management Alliance) protested, asking for more specific thresholds on the triggers for a review, and advocating for a floor on changes requiring review (e.g. 1 kW). FERC disagreed and supported NYISO’s explanation that a de minimis exemption is not required by Order 2222 and that an appropriate universal exemption would be impossible to define. FERC also declined to mandate changes to the proposed 90-day total review period, as it is comprised of both the 60 day DU review and 30 day NYISO administrative buffer. FERC states that these timelines are within the requirements of 2222 and that NYISO’s 30 day window aligns with the month-to-month capacity market administrative tasks the market operator must carry out.

The potential for a 90 day window to elapse between adding a resource to an aggregation and the ability of the aggregation to fully participate in a market is why I rated this item grouping among the worst for Aggregators. Many Aggregators (like Leap) would prefer to move more quickly and begin securing value for our partners as fast as possible. Unfortunately, these barriers will remain a go-to-market obstacle for the foreseeable future.

Next up, let’s move in a more positive direction with a focus on some coordination issues. 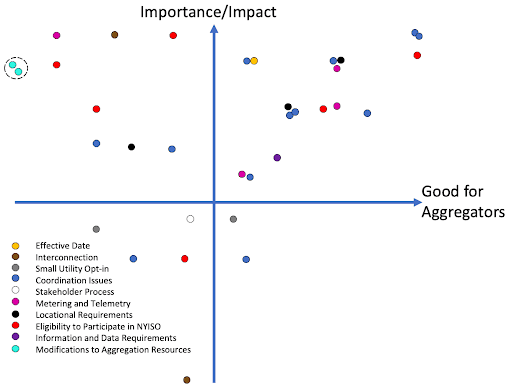 A topic previously discussed in this space - how the heck are Aggregators, the ISO and DUs going to transmit data in the day-ahead timeframe and talk to one another during real-time market operations? Well, it seems like FERC ended up in a similar place. There are two broader categories here, let’s focus first on the upper right, totally unambiguous wins for Aggregators.

The items in the upper right corner of our ranking are both related to requests the NYTOs made in their filings on the topic of default reliability risks. The TOs preferred the status quo to be one in which they have to clear an aggregation as not a reliability risk, with an implied default position of DER being a risk to reliability. This would have been a terrible outcome for Aggregators and certainly not in the stated language of removing market barriers present in Order 2222.

The second set of Aggregator wins in this space relates to day-to-day coordination. FERC here cited comments Leap submitted as part of the AEE filing, which noted the lack of materials on how coordination will actually occur beyond referring to manuals and processes which rely on phone calls and emails - not exactly cutting edge stuff. Additionally, the existing procedures are biased towards large centralized generation facilities where a single plant manager can effectively modify operations at the entire facility in person. In the modern DER aggregation context, operations are carried out seamlessly and instantaneously using the internet and other telecommunications technologies.

These wins are not unambiguously in the upper right because FERC is only requiring the NYISO to provide more detail and encouraging the ISO to engage stakeholders, not discussing specific actions which would benefit Aggregators. The forthcoming final compliance filing could move these items to the left or right, but for now, just the fact they are being addressed is a positive from our perspective.

Next week, we will continue our discussion with insights on participation eligibility.